3 November, 2015
On Wednesday, 28, the Imply CEO went to Montevideo, Uruguay, to close contract with the Club Atlético Peñarol, which is under construction of their new stadium. After more than 50 years without investing in new stadiums of this size in the country, the new Stadium of Club Atlético Peñarol, is the result of a project of over three years and an investment of thirty million dollars.
The new Peñarol Stadium will have a capacity of forty thousand people, and offer to the public food court, conference room, museum and other facilities. The opening of the new Peñarol Stadium is scheduled for February 2016, and Uruguay already has the intention to use the stadium to host the games of a possible World Cup in 2030.
Imply will provide the access system for the entire stadium, both for vehicles and for people, which will optimize the access of visitors, in addition to making this process more secure. A Full Color panel will also be provided by Imply for the new Peñarol stadium, providing a better experience within the Stadium for all visitors.
“A Full Color display was purchased, 9 x 11 meters. It’s bigger than the one in Centenario Stadium with a much more modern higher resolution. We are trying to make the Peñarol Stadium in the best way. In addition there will be a new system for entry to the stadium. Each person will have a card that has a kind of chip inside that will be recognized by the turnstile. For everyone the access will be like this. The card is purchased only once and then can be recharged over the Internet. The card’s going to be read by the sensor, which will identify, will say if you can pass or not, if you’re in the indicated area.”
Rodolfo Catino, director of Peñarol.
Imply Technology is already a leader in the access control in Brazil, with its technology present in 9 Arenas, 8 of them venues for the 2014 World Cup.
At the time of contract closure (image), were present: Chairman of Peñarol Mr. Juan Pedro Damiani, General Secretary Gervasio Gedanke, Marketing Director Pablo Nieto Moreno, General Manager Alvaro Alonso, the Treasurer Rodolfo Catino and the Chief Executive Officer of Imply, Tironi Paz Ortiz.
Share: 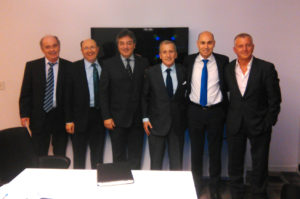