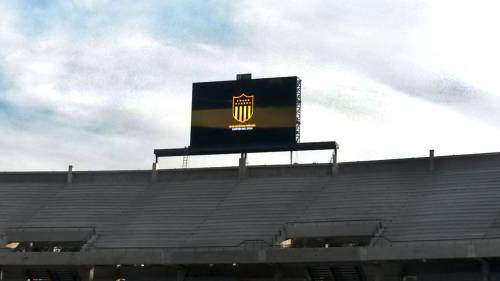 After 25 months of the start of construction, the stadium named Stadium Campeón del Siglo, promoted a great opening , which took place on Wednesday, March 30. The Campeón del Siglo has a capacity for 40,000 people, and was built in Montevideo, the capital and largest city of Uruguay.

The new stadium is a major milestone for the country as it solidifies and becomes close to the idea of ​​hosting matches of the World Cup 2030, since Uruguay plans to apply, along with Argentina, for this edition of the event.

Imply Technology is proud to be a part of this great project with Access Management System for people and vehicles with 73 turnstiles and 6 parking gates that enhance the comfort and safety of visitors to the stadium, and also has a FullColor Panel with 79,6m² (856,8 ft²) that reproduces images with high quality, enhancing the interaction and experience lived inside the stadium.

Founded on September 28, 1891, Peñarol is the greatest champion of the Uruguayan Football Championship with a total of 49 titles, also considered one of the most traditional and successful teams in South America, having 5 achievements of the Libertadores Cup and, worldwide, is a team with great emphasis, with three titles of the Intercontinental Cup.