Home / Game of the Stars had online sales by Super Tickets

Game of the Stars had online sales by Super Tickets

The 13th edition of Solidarity Soccer, the incredible Game of the Stars, took place on December 27 at the Maracanã Stadium and was a success. A total of 46,758 people were present at the stadium. The result of the match was 7 for the red team x 4 for the white team.
Every year Rio de Janeiro is transformed into a center of attention for soccer lovers with a charity game that marks the end of the year and brings together the best players of all times. All amount collected in the match is directed to charity. The event takes place since 2004 and brings together several names of Brazilian soccer, such as Romário, Zico, Adriano, Tita, Renato Gaúcho, Djalminha, Amoroso, Donizete, Carlos Alberto Santos among others. In addition to great personalities of music, such as Jermaine Jackson, brother of Michael Jackson and member of the Jackson Five.
This year, besides the solidarity show, it was also possible to count with the Online Sales show! Through Super Tickets, the fans could buy their tickets with convenience, ease and security. 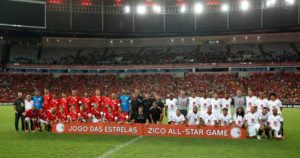